This community space on the intersection of York Blvd and Figueroa Street is now open to the public – so go check out the brand new fountain and California native plants.  Also, stay tuned for some more improvements at the Veteran’s Memorial Square and opportunities to participate! We hope to see you there! 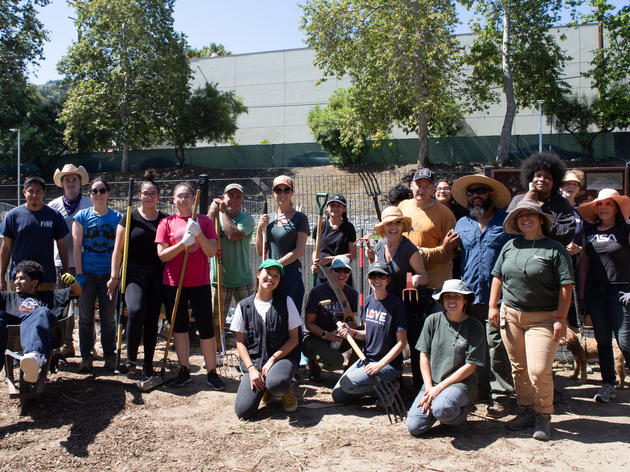 Kicking off our work at the Zev Yaroslavsky LA River Greenway Trail!

White sage is one of the native plants in the chaparral sage scrub plant community you can find here at Debs Park. It's drought tolerant like all of our native plants and has a funky smell that some people love and some people highly dislike. If you rub the leaves, you'll find they're a little sticky. That's because like most salvia spp., this plant produces it’s only natural sunscreen for this harsh sunny California climate. White sage is also a huge hummingbird plant - you'll often find a bunch of hummingbirds floating around it.

You've probably encountered white sage before, in the form of a sage smudges- many like to burn sage as is it thought to "purify" or "cleanse" spaces.  This practice takes root in indigenous communities around the world, many of whom consider sage a sacred plant used to ceremonially cleanse or purify spaces or people. Unfortunately, the practice of "sage smudging" has led to overharvesting and the white sage population has declined in recent years.

We invite you to come check out our white sage population throughout our Center. While you're here, make sure read about some of ways our local indigenous communities use white sage in our Children's Woodland!

Before we highlight Fall migration species, let's give a shoutout to one of our resident bird species. The California Towhee is a resident bird of Debs Park meaning you can find them here 365 days of the year. You can usually find these ground feeding birds constantly scratching leaf litter for food using both their feet at the same time - they do a little hop and scratching motion. Their diet is variable from seeds, to fruits, and insects. They also may mate for life if they find the right birdie and both parents tend the nest. Little California Towhees can leave the nest as early as 8 days, but will follow parents around for several weeks! You only find these little ones along the Pacific seaboard from Southern Oregon and Baja California, so come check them out and pay Debs Park a visit any time of the year.

Last month we wrapped up the Plants for Birds summer internship program, led by Fund II Apprentice, Tania Romero. Six students from Sotomayor Learning Academies and Anahuacalmecac International University Preparatory participated in a six week internship program, where they developed foundational knowledge in regards to growing and propagating native plants, understanding local birds and their habitats, and engaging volunteers and community members through habitat restoration events and bird walks. Justin, Iren, Blanca, Ahui, Alexandra, and Raul played a key role in establishing the native plant nursery at Sotomayor Learning Academies, transplanted over 400 native plants, seed collected and processed over 5 native plant species, sanitized over 200 cones and flats, and helped with 5 volunteer events and 1 community bird walk. All in just 12 sessions! We are so appreciative of their willingness to learn, to work together, and to truly embrace the experience with open minds and dedication to the internship program. The summer interns were an amazing addition to the Debs Park team, and although we will miss their enthusiasm and energy we hope that they will take what they’ve learned this summer back to their respective schools and become conservation and community engagement leaders among their peers and in their community. We are proud and honored to have played a role in the development of this next generation of environmental stewards, and wish them all the best in their future endeavors.

Special thanks to the Gottlieb Foundation for funding this amazing opportunity for local youth!

Few people have contributed as much to the Audubon Center at Debs Park over the past few years as The Mighty Monday Watering Team – Keiko, Olga, Marshall, and Mary. If you have volunteered here at the Center and/or spent any time in the Los Nogales Nursery, you will have likely have met and worked with one or more of these incredible individuals. These four have been the core members of the squad, making sure the nursery plants get the water they need, that they are “bumped up” in a timely manner, and that there are always clean cones and pots, for over two years. In addition to maintaining the nursery, they have engaged with countless volunteers and oftentimes will step into a leadership role and guide others through the process.

Each of them have also stepped up even further, beyond the nursery – Marshall refills the hummingbird feeders and he and Olga have participated in bird banding and surveying work, Mary washes all of the volunteer gloves at home so that we have clean ones to use for each event, and Keiko has helped lead arts & crafts activities, participated in education and community outreach events, and deserves a special shoutout for her role as coordinator of the Watering Team. These four truly exemplify the spirit of volunteerism, and we are endlessly grateful for their time, energy, and dedication. Not only that, they are extraordinary people who have taught our team so much, and we are lucky to consider them our friends. We could not do it without y’all! Next time you see Keiko, Olga, Marshall, or Mary around the Center, please thank them for everything that they do.

California Buckwheat is a staple at our park and at our nursery!  It blooms creamy white leaves in the spring which turn to rusty-brown as summer fades into fall.  Buckwheat flour belongs in the same family, but making anything  of this plant would not be palatable.  Here's a recipe on how to make buckwheat flour.

Forages very actively in dense vegetation. Forages at various levels, sometimes high in trees but usually low, searching for insects among foliage, on twigs and branches, in the bark of tree trunks, and on the ground.

Mostly insects. Feeds on a wide variety of insects, including beetles, true bugs, grasshoppers, crickets, caterpillars, moths, flies, and many others. Also eats many spiders, plus some millipedes and snails.

Male defends territory by singing. Courtship involves male singing, showing the female potential nest sites. Adults often puncture the eggs of other birds nesting nearby (including other House Wrens). Male may have more than one mate; female may leave male to care for young from first brood while she moves to another male's territory and nests again. Nest site is in any kind of cavity, including natural hollows in trees and stumps, old woodpecker holes, crevices in buildings, often in nest boxes. May nest in almost any kind of enclosed space (flowerpots, parked cars, shoes, drainpipes, etc.). Site is usually low, may be high in trees, especially in western mountains. Male builds incomplete "dummy" nests in several cavities; female chooses one and finishes nest by adding lining. Nest has a foundation of twigs, topped with softer cup of plant fibers, grass, weeds, animal hair, feathers.

Bilingual Bird Walks for our community along the LA River!

As of April, the Audubon Center at Debs Park has been holding Bilingual Bird Walks at the Rio de Los Angeles State Park, led by Tania Romero – our Fund II Foundation Apprentice.  Tania has been a birder for 4 years now.  After noticing that many bird walks are led in English and not accessible to her family (the majority of whom do not speak English), Tania was inspired to host bilingual bird walks in order to invite her family and community to learn more about birding.

On Saturday, July 6th 18 people showed up at the Rio de Los Angeles State Park to go on a bird walk along the park’s wetland habitat.  We were proud to facilitate an incredibly diverse bird walk with Tania’s help!  Most of the audience were people of color, and most identified as bilingual in English and Spanish.  Some of the day’s sights included Lesser goldfinches, mourning doves, Anna’s hummingbirds, Northern mockingbirds, and a Red-tailed hawk.  This walk provided local Latino families with a fun and educational opportunity to learn about the local birds that surround them.

When planning the Bilingual Bird Walk, Tania’s idea was to host an English bird walk and a Spanish bird walk concurrently, led by 2 different birders.  This shifted to one bird walk, with a bilingual birder who could communicate the information both in English and Spanish.  Tania began learning bird names in Spanish.  She noted that, “Learning birds in Spanish has definitely made my birding experience a lot more fruitful because I am able to introduce birds and birding to native Spanish speakers who don’t speak another language.  Also, some of the bird names make a lot more sense in Spanish and provide insight and further connections.”  An example she gave was the Black Phoebe, whose name in Spanish is Papamoscas negro.  Papamoscas negro directly translates to “black fly eater”.  Black Phoebes are part of the flycatcher family – their diet is almost entirely insects!

For Tania, these bilingual bird walks serve as a representation of herself navigating two worlds at the same time and her experience as a Mexican-American woman and a Latina birder, where she simultaneously navigates two different languages all the time.

We will be continuing our Bilingual Bird Walks at El Rio de Los Angeles State Park.  Join us next time on September 7th and bring your family!

The Audubon Center at Debs Park has partnered with Alma Family Services to host Family Mindfulness Hikes once a month at our Center.  Drawing on the important connection between spending time outdoors and mental health, thr purpose of these hikes is to bring families together in an outdoor setting to decompress from life's everyday struggles.  These hikes are held in our Butterfly Loop, where Alma Family Services staff place little markers reminding hikers to take deep breathes, count to ten, and other important mindfulness tips for dealing with difficult emotions.  These hikes allow families to come together and have fun on our trails and with each other.

Alma Family Services offers snacks at the beginning of each Family Mindfulness Hike.  While families arrive and get started, we host small little activities such as mini Zumba lessons or stretching sesions.  This gives families a chance to get in a relaxed mood and begin connecting.  During the hike, we take breaks and make sure to move at a pace where everyone can keep up.

Here at the Audubon Center at Debs Park, we are always looking for ways that our community can connect with each other and with the urban wildlife that surrounds them.  We are glad to be partnering with Alma Family Services to provide our community an opportunity to find peace in the outdoors - and check out some birds too!

Make sure to join us for our next Family Mindfulness Hike - we host them on the first Saturday of the month starting at 8:30am.  Our next hike is scheduled for September 6th!

Save the date for Bird LA Day

Join Bird LA, Audubon California, Audubon chapters, and a huge collection of other cool groups on May 7, 2016, for a super fun, de-centralized all-day celebration of birds all over LA County. 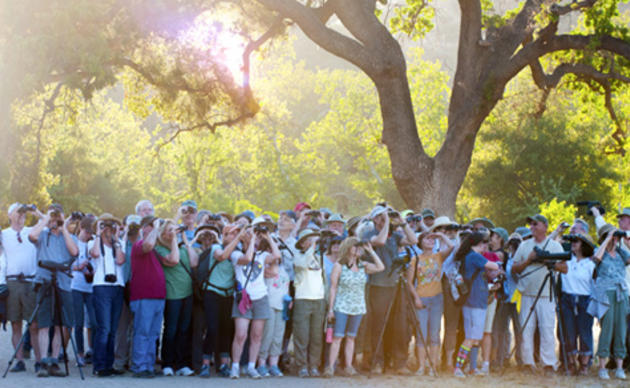