Birds in This Story

This past Saturday, we held our annual Bird LA Day celebration- and it was a hoot! Despite a rather dreary day of clouds and light rain, over 125 people came to celebrate birds with us! 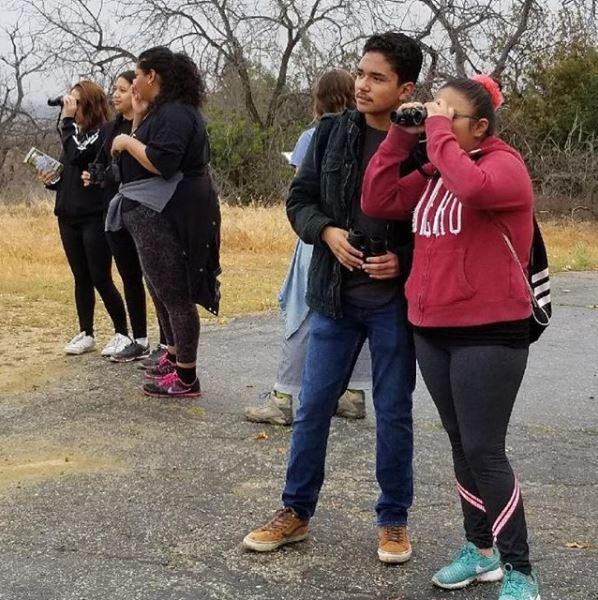 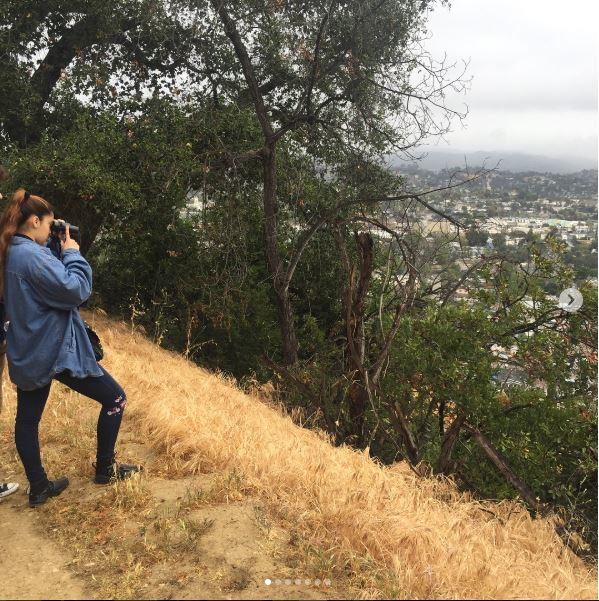 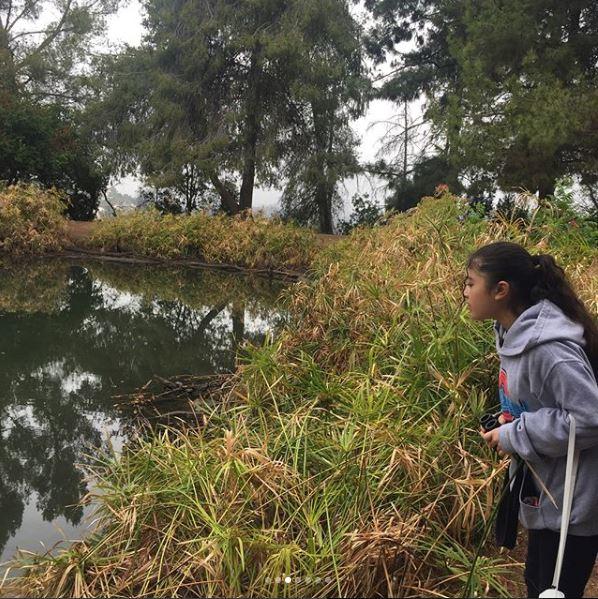 The event kicked off with an early morning bird count led by Audubon Staff and a handful of community naturalists. Members of the Northeast LA community and YouThink Youth joined us for the hike- lots of clouds and low lighting made for tough birding, but we had some enthusiastic and determined teams! In all, we heard and saw over 40 species and 363 individual birds. The groups were most excited about the glimpses of colorful migrants including Western Tanagers, Black-headed Grosbeaks, Townsend’s Warblers, Wilson’s Warblers, Hermit Warblers, and Lazuli Buntings. 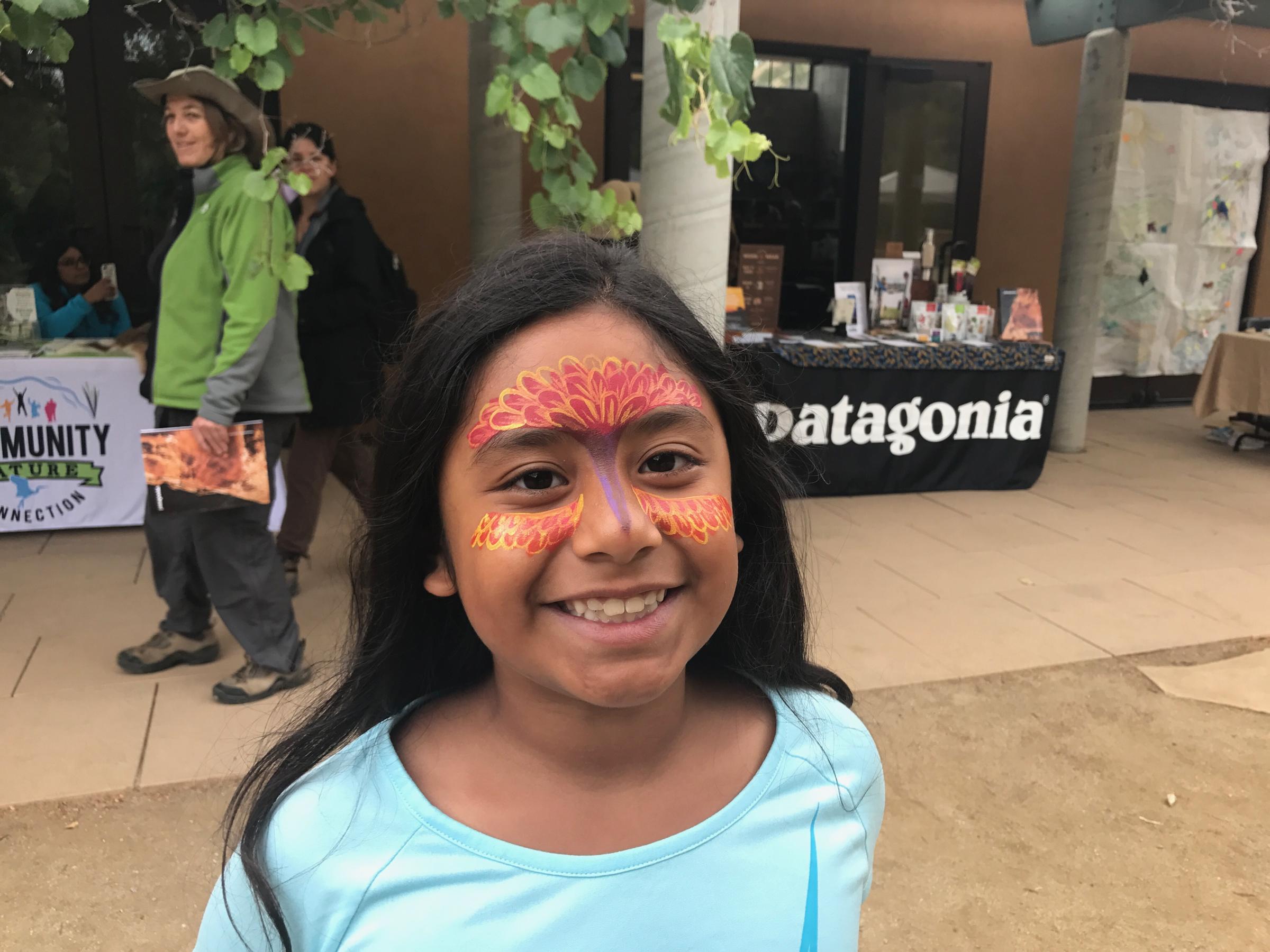 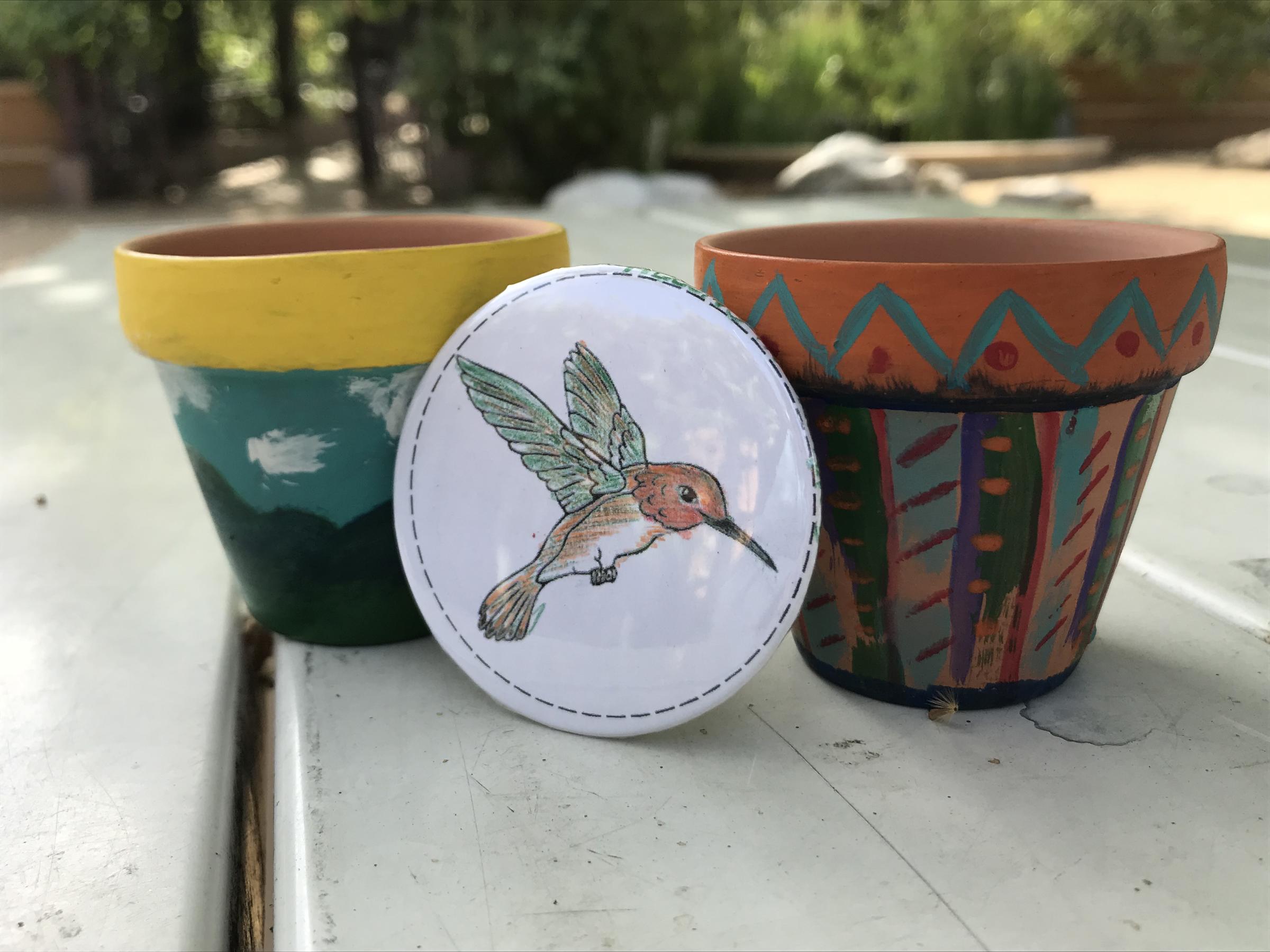 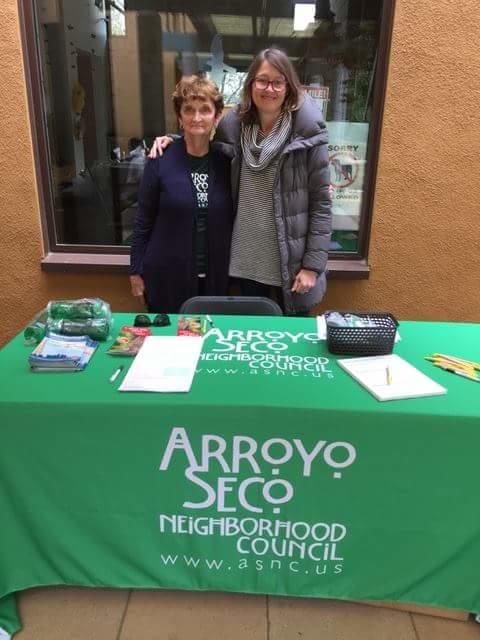 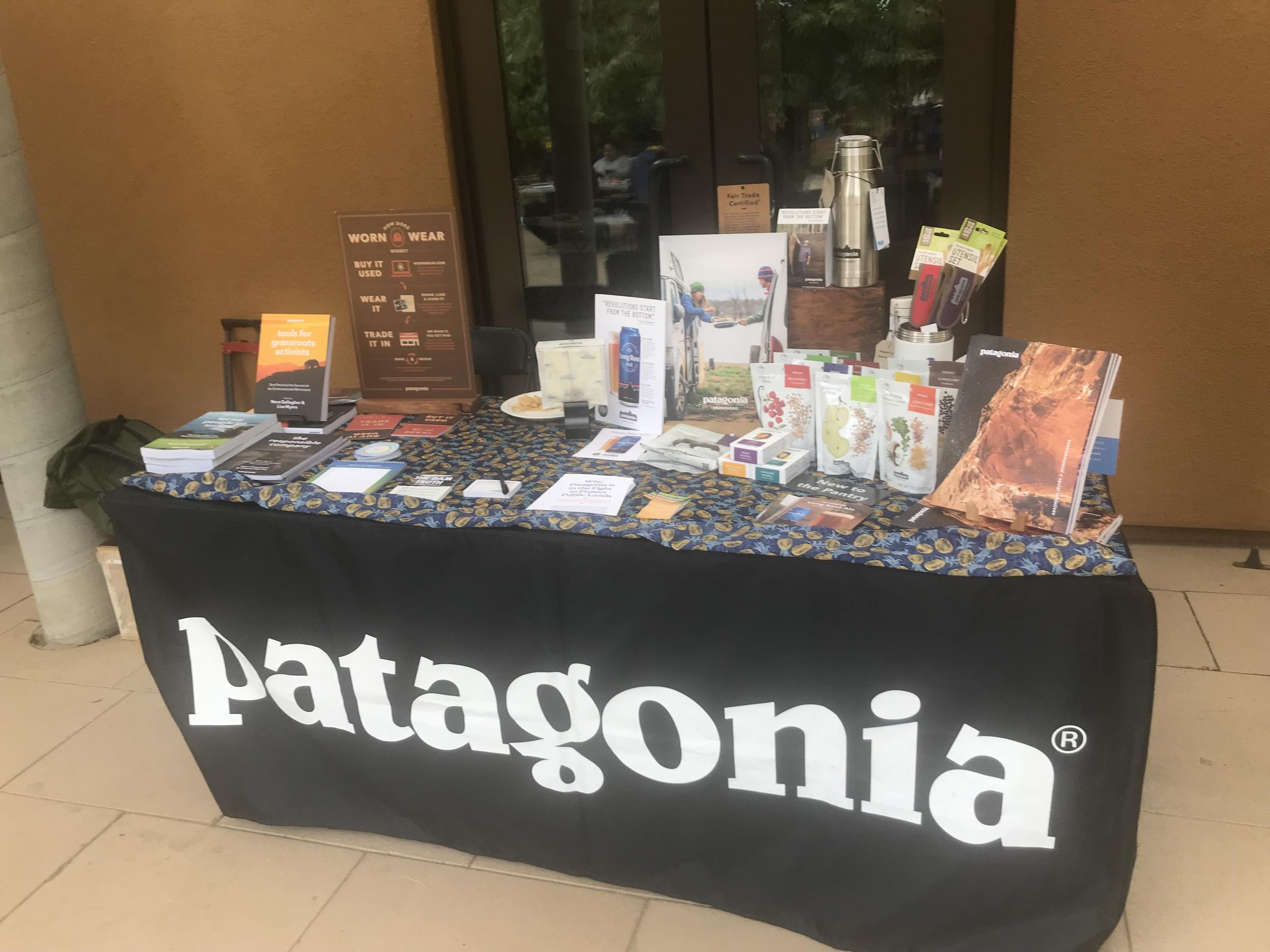 The Nature of Wildworks’ live birds of prey show was a hit and a major event highlight! Visitors marveled over a majestic variety of raptors including a Harris’s Hawk, two Red-tailed Hawks, a juvenile Peregrine Falcon, a Great-horned Owl, and a Barn Owl named “Dancer”. Audience members learned about the differences between hawks and falcons, and discovered fascinating facts that highlighted impressive characteristics of each bird. Did you know a Peregrine Falcon can dive over 200 mph? Or that an owl can’t move their eyes in their sockets, but can turn their heads 270 degrees? Amazing! 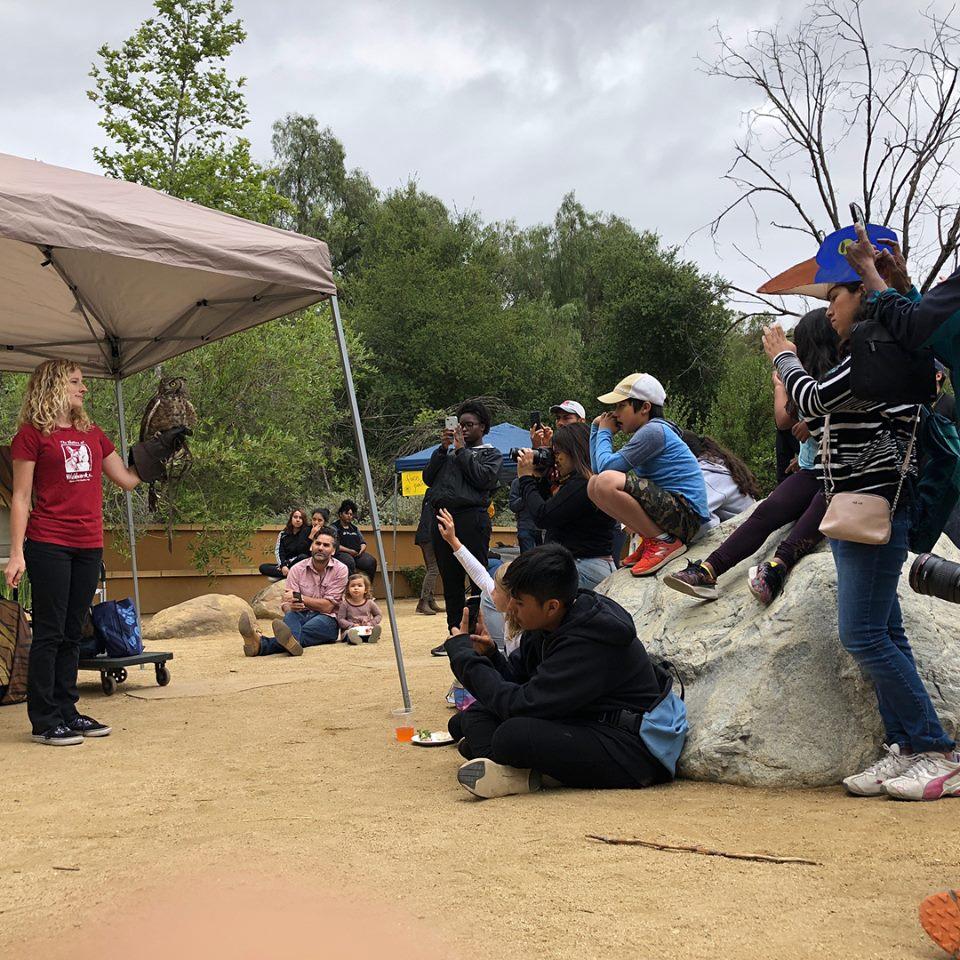 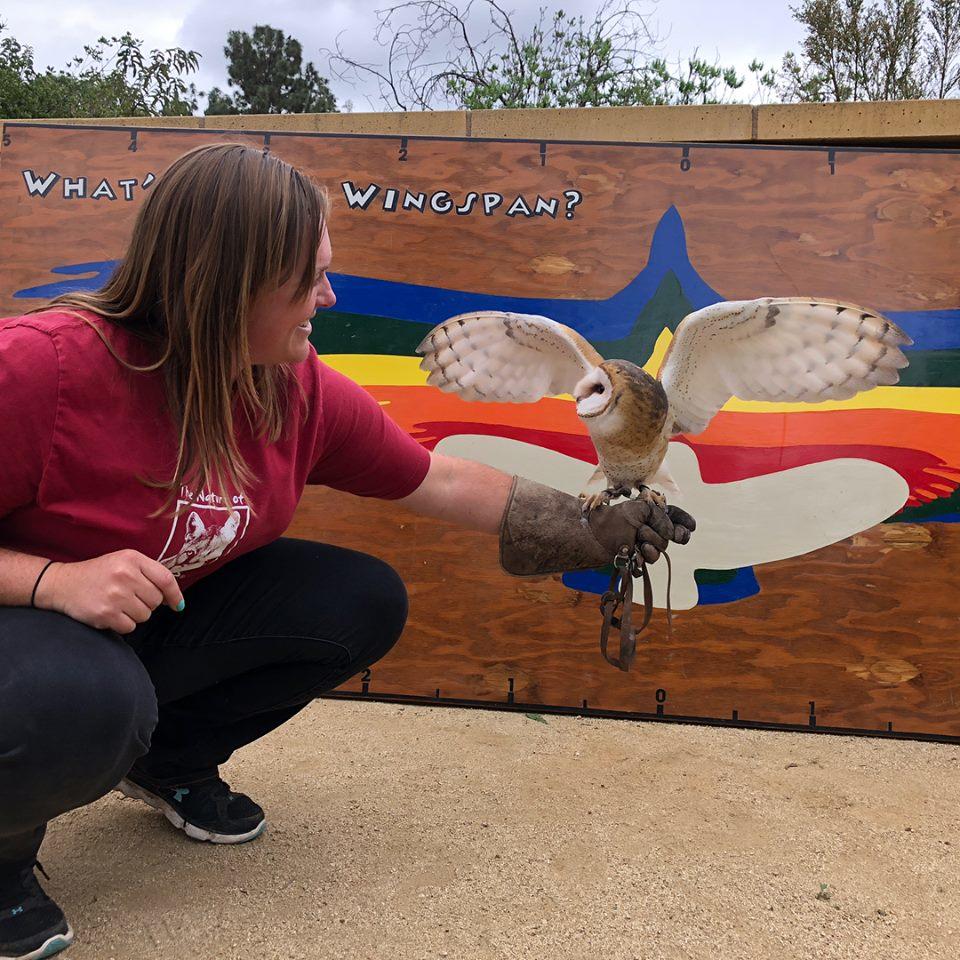 Comparing Dancer's wings to the chart. Photo: Nature of Wildworks 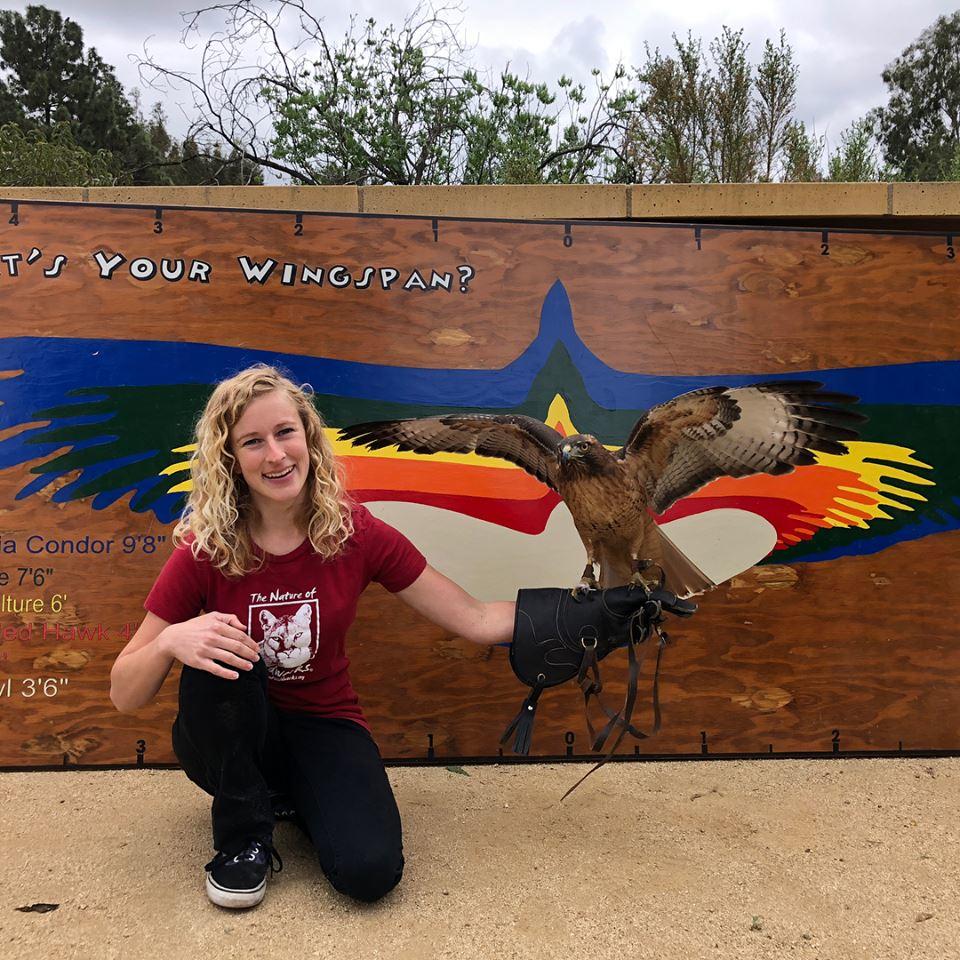 Checking to see how Dragon measures up. Photo: Nature of Wildworks 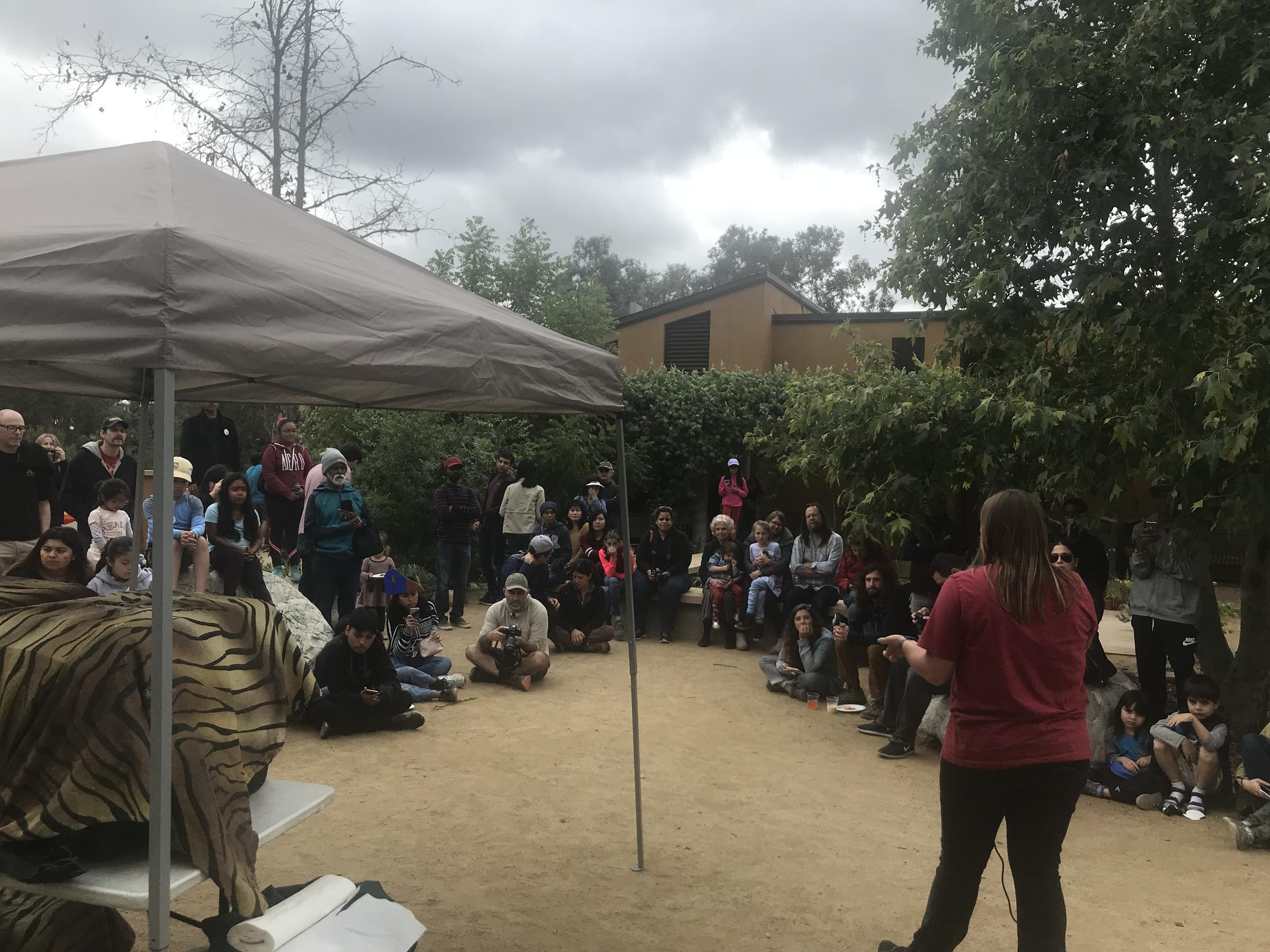 The crowd watches in anticipation to see who they'll meet next. Photo: Nature of Wildworks 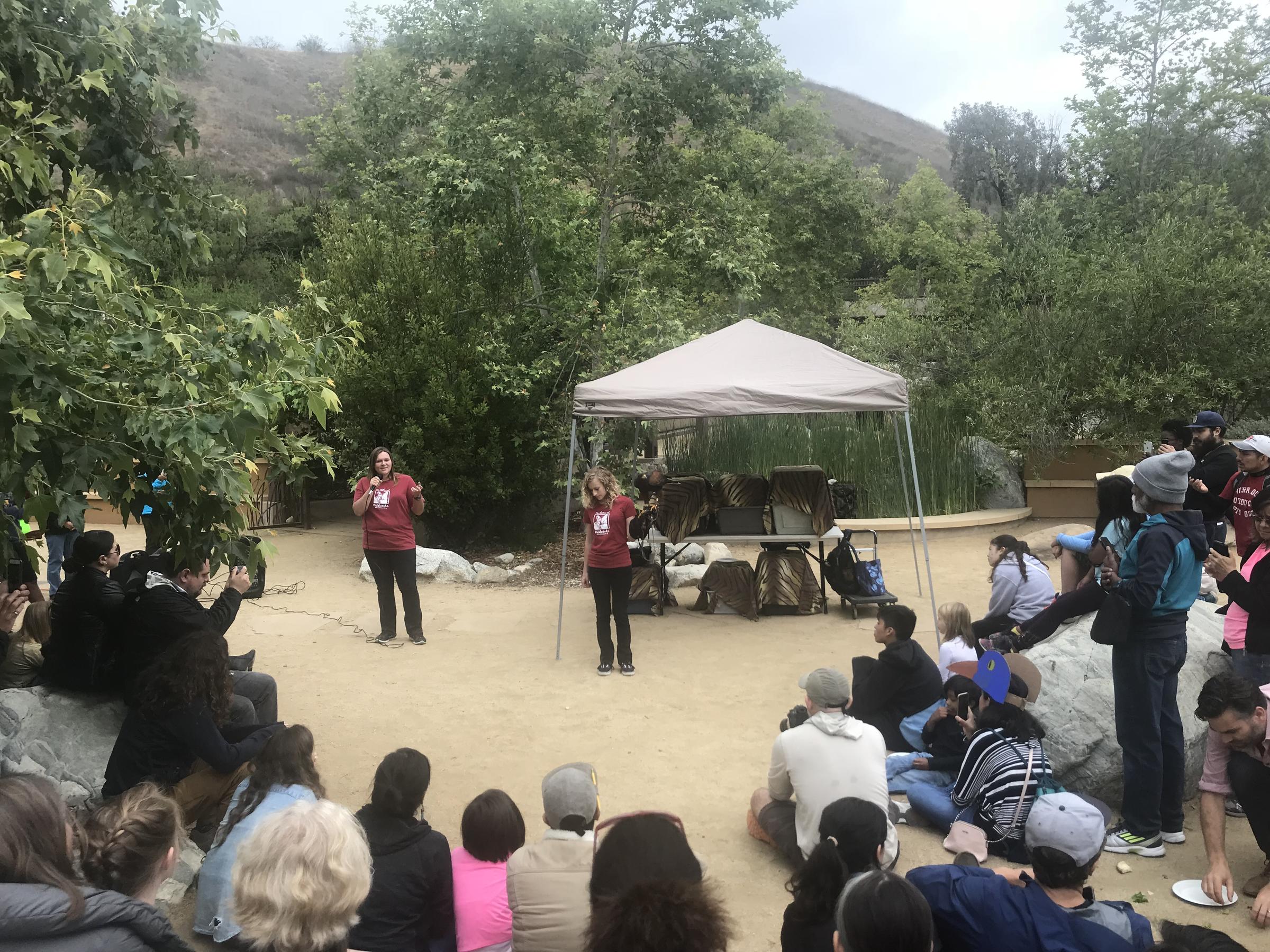 The audience meets a Harris's Hawk. Photo: Nature of Wildworks 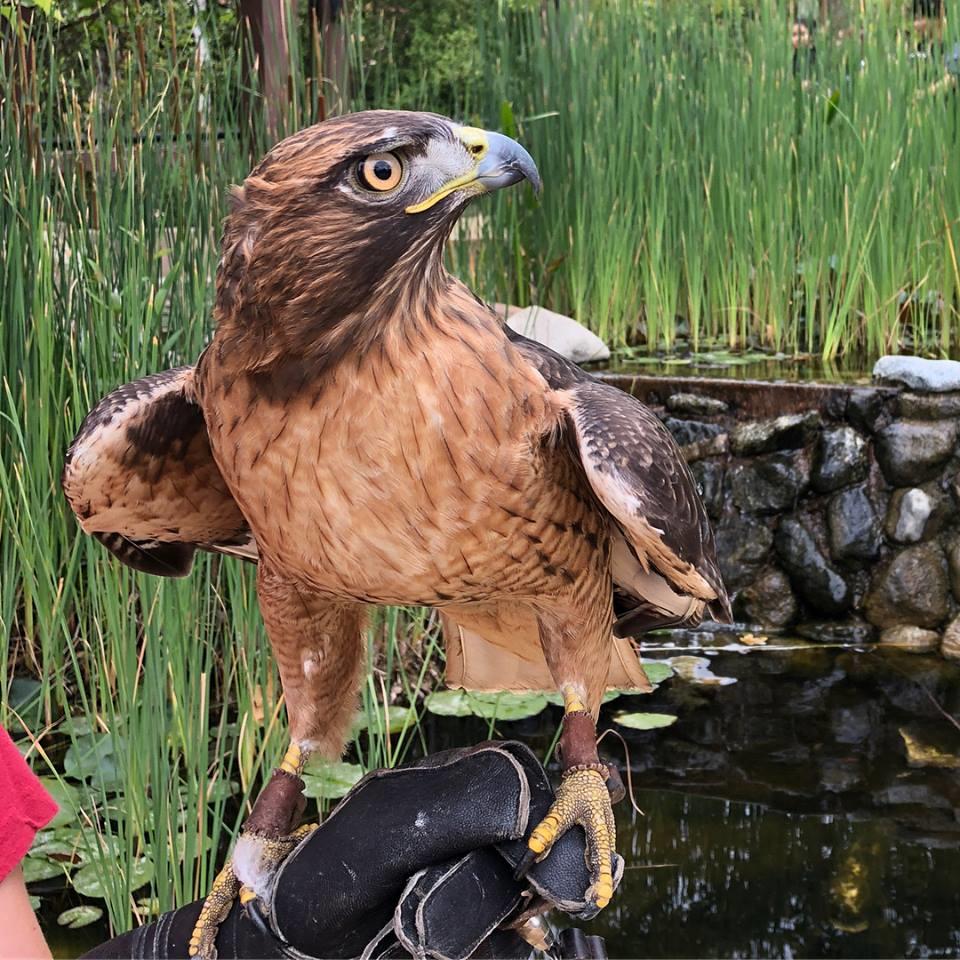 The Nature of Wildworks also revealed the secret behind many raptor’s “eternal grumpy look”, distinguished by their protruding, seemingly furrowed brows: The secret is, they’re not grumpy at all! But really, those brows act as “sunglasses” and aid their already impeccable eyesight by shielding bright light from the sun. Audience members also learned that despite their large eye size, owls actually don’t have the best eyesight and rely mostly on asymmetrically placed ears for hunting by sound. Wildworks demonstrated the quiet flight of a Barn Owl’s wings by sending Dancer up and down in the air, as the audience stood in wonder at the sight of flapping wings accompanied by complete silence! 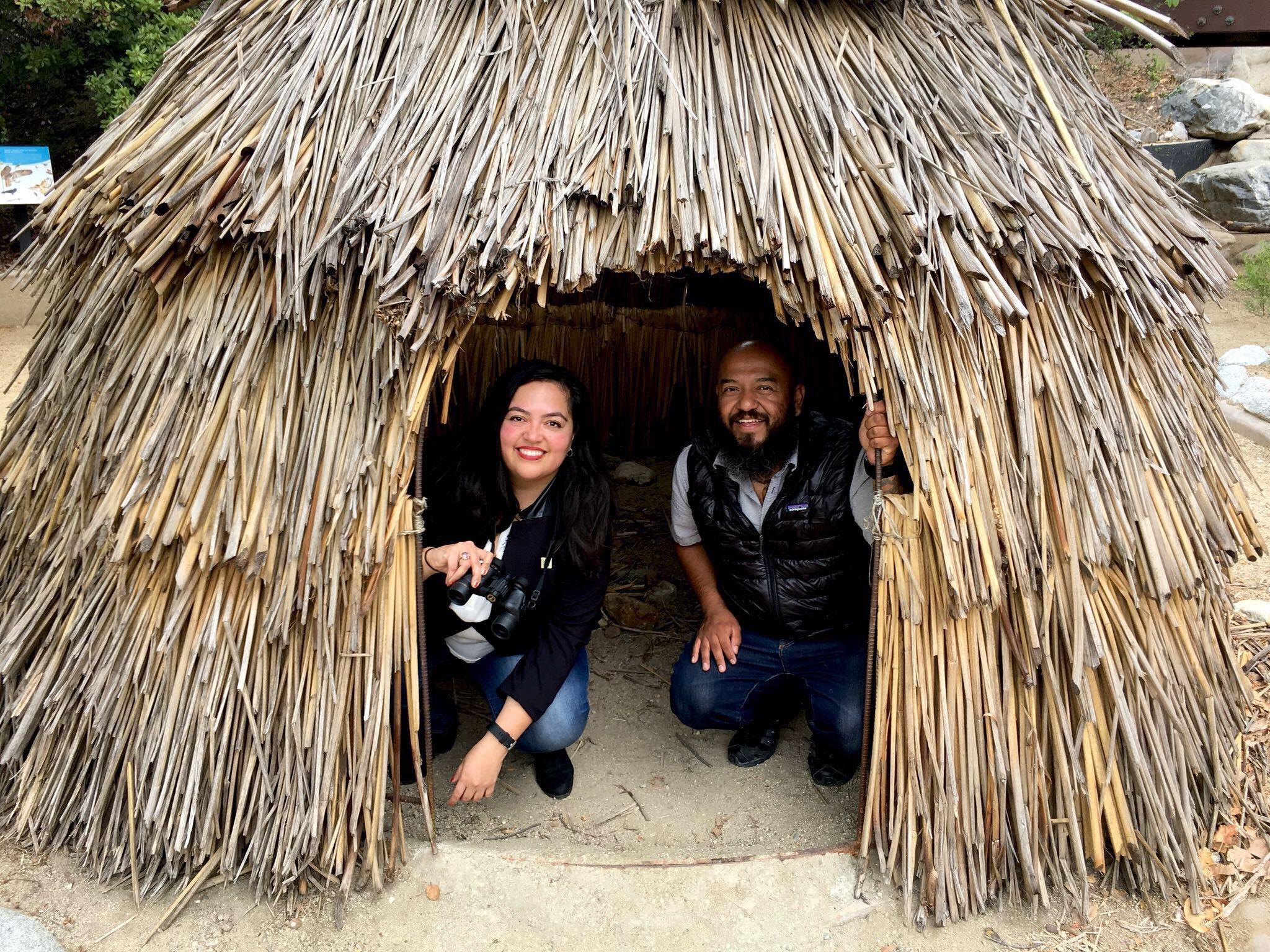 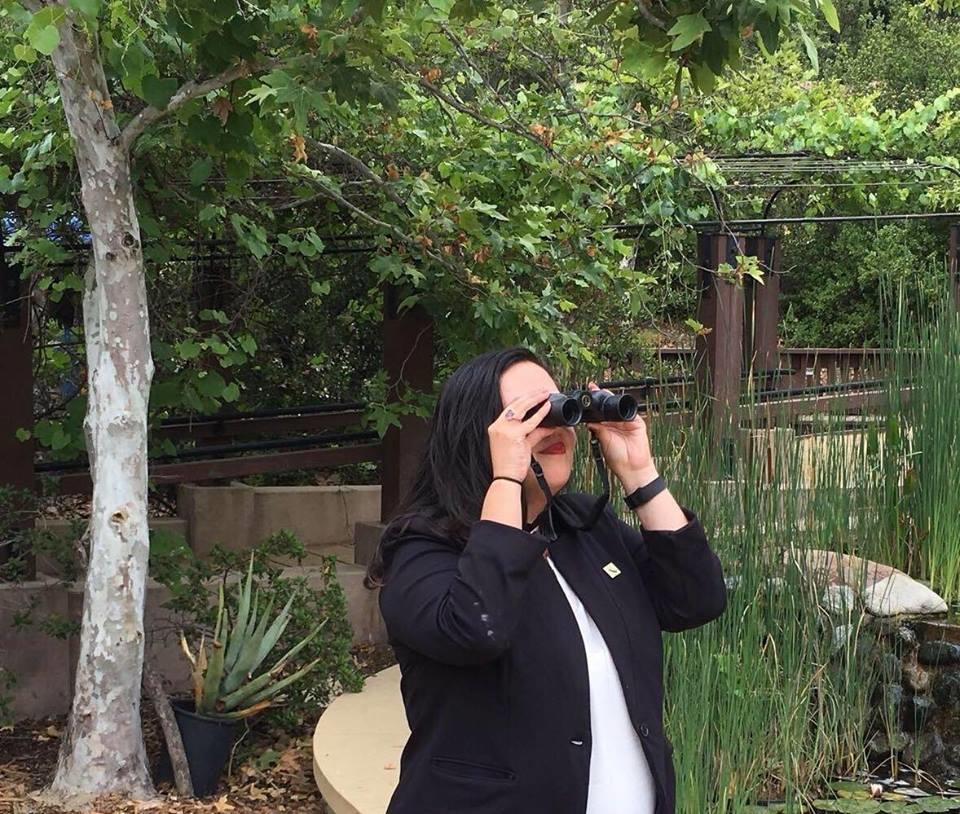 What do you see, Wendy? Photo: Alfonso Ruiz-Delgado

Assemblymember Wendy Carrillo stopped by to partake in the festivities and to remind all how important it is to care for and invest in open spaces. She expressed excitement that the Audubon Center at Debs Park offers free monthly community programs and events that connect people to nature, and reiterated the intrinsic value of accessibility to parks and open green space in our communities.

Throughout the event we held tours of our Los Nogales Native Plant Nursery, highlighting the process of propagation and native habitat restoration. LA Compost demonstrated composting how-tos, and showed how to turn a compost pile. Raffle prizes were awarded all day, and event goers walked away with amazing prizes donated by REI and Wild Republic. Arroyo Seco Neighborhood Council provided a filling lunch, and Maracas hooked it up with refreshing agua frescas and horchata.

Arroyo Arts Collective put on a series of 3 short puppet shows that allured children and adults alike through song and storytelling using handmade puppets resembling animals found in the park.

It was a fun-filled day of creativity, inclusivity, love, and certain admiration for our feathered friends. It was an incredibly rewarding experience to see the community gathered together in such a beautiful space, in honor of birds!

For more photos of the Nature of Wildwork's raptors, check out Pieter Kaufman's photography here.